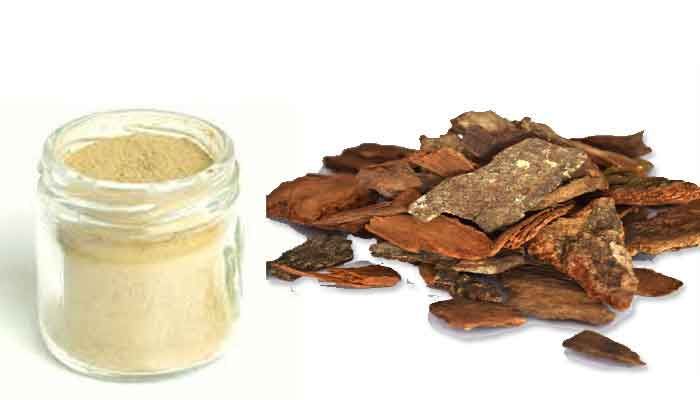 This package has 100% pure and organic Mesquite Tree Bark / Karuvelam Patti Powder with out any chemicals or preservatives.

Prosopis juliflora is a shrub or small tree in the family Fabaceae, a kind of mesquite. It is native to Mexico, South America and the Caribbean. It has become established as an invasive weed in Africa, Asia, Australia and elsewhere. It is a contributing factor to continuing transmission of malaria, especially during dry periods when sugar sources from native plants are largely unavailable to mosquitoes. Growing to a height of up to 12 metres (39 ft), P. juliflora has a trunk diameter of up to 1.2 metres (3.9 ft).Its leaves are deciduous, geminate-pinnate, light green, with 12 to 20 leaflets. Flowers appear shortly after leaf development. The flowers are in 5–10 cm long green-yellow cylindrical spikes, which occur in clusters of 2 to 5 at the ends of branches. Pods are 20 to 30 cm long and contain between 10 and 30 seeds per pod. A mature plant can produce hundreds of thousands of seeds. Seeds remain viable for up to 10 years. The tree reproduces solely by way of seeds, not vegetatively. Seeds are spread by cattle and other animals, which consume the seed pods and spread the seeds in their droppings.Its roots are able to grow to a great depth in search of water: in 1960, they were discovered at a depth of 53 meters (175 feet) at an open-pit mine near Tucson, Arizona,putting them among the deepest known roots. The tree is said to have been introduced to Sri Lanka in the 19th century, where it is now known as vanni-andara, or katu andara in Sinhala. It is claimed that P. juliflora existed and was recognised even as a holy tree in ancient India, but this is most likely a confusion with Prosopis cineraria.

The tree is believed to have existed in the Vanni and Mannar regions for a long time[citation needed]. This species has thorns in pairs at the nodes. The species has variable thorniness, with nearly thornless individuals appearing occasionally.In the western extent of its range in Ecuador and Peru, Prosopis juliflora readily hybridises with Prosopis pallida and can be difficult to distinguish from this similar species or their interspecific hybrid strains. esquite is one of the most expensive types of lumber native to the US.[citation needed] It was a popular type of wood used by early Spaniards to build ships, but is now used most commonly for high-end rustic furniture and cabinets. Scraps and small pieces are used commonly as wood for cooking with smoke in Southern states. The sweet pods are edible and nutritious. They can be eaten raw, boiled, stored underground, or fermented to make a mildly alcoholic beverage.The species' uses also include forage, wood and environmental management.In the Macara Canton of Ecuador, Prosopis juliflora can be found in dry forests where it is one of the species most frequently harvested for multiple forest products.

How to use Mesquite Tree Bark / Karuvelam Patti Powder :

Reviews 3
Write Your Own Review