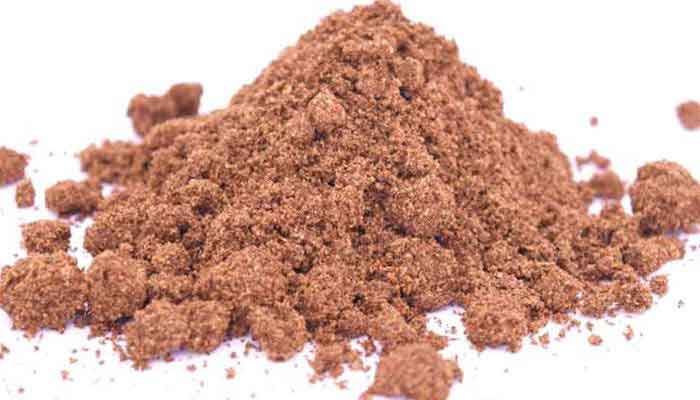 This package has 100% pure and organic Marsh Barbel Seed / Neermulli Vithai Powder with out any chemicals or preservatives.

Hygrophila auriculata (Sanskrit: Kokilaksha) is a herbaceous, medicinal plant in the acanthus family that grows in marshy places and is native to tropical Asia and Africa. In India it is commonly known as kokilaksha or gokulakanta, in Sri Lanka as Marsh Barbel / Neermulli. In Kerala it is called Vayalchulli.In Tamil it is called "Neermulli". Marsh Barbel is a stout aquatic perennial herb, 1-2 m high. Erect unbranched stems are hairy near swollen nodes. Densely hairy, lance-like, stalkless leaves, 10-15 cm long, occur in whorls of 6 at each node on the stem. Straight, yellow, 4 cm long spines are present in the axil of each leaf. Flowers occur in 4 pairs at each node. The 3 cm long purple-blue flowers are 2-lipped - the upper lip is 2-lobed and the lower one 3-lobed with lengthwise folds. Flowers open in opposite pairs. Flowering: October-April.Unverified information Kokilaksha, as it is known in sanskrit, was extensively used in Ayurvedic system of medicine for various ailments like rheumatism, inflammation, jaundice, hepatic obstruction, pain, etc.

Marsh Barbel Seed / Neermulli Vithai Powder is used in traditional medicine systems for a number of ailments. These include impotence and quality of sperm. Sexual dysfunction in men can be in the form of loss of libido i.e., having no inclination towards a sexual act. There can also be a low erection time or semen expelled soon after a sexual activity. This is also referred to as ‘early discharge or premature ejaculation. Taking Marsh Barbel Seed (Neermulli Vithai) Powder helps to correct male sexual dysfunction and also improve stamina. This is due to its Vajikarana (aphrodisiac) property.Marsh Barbel Seed / Neermulli Vithai Powder are given in milk to improve the male libido, so it is supposedly an aphrodisiac.

Malnutrition can be correlated to Karshya disease in Ayurveda. This is due to lack of nutrients and improper digestion. Regular use of Marsh Barbel Seed / Neermulli Vithai Powder helps to manage malnutrition. This is due to its Balya (strength provider) property which gives strength to the body. Kokilaksha provides instant energy and fulfills the calorie requirement of the body.

Marsh Barbel Seed / Neermulli Vithai Powder helps to reduce the symptoms of Gout when it is taken regularly. Gout is a painful metabolic disease resulting in inflammation and deposition of uric acid in the joints. In Ayurveda, gout is known as Vatarakt. This is because the main dosha involved is Vata and it affects Rakta (blood). Kokilaksha gives relief from the symptoms of gout due to its Vata-Pitta balancing property.

5 Grams of Marsh Barbel Seed / Neermulli Vithai Powder can be mixed with water and then boil for few minutes. After water gets warm filter and drink it.