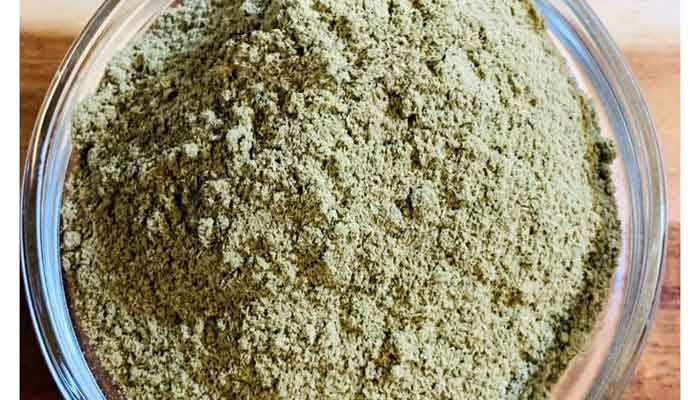 This package has 100% pure and organic Indian Mallow / Thuthi Ilai / Atibala Powder with out any chemicals or preservatives.

Indian Mallow / Thuthi Ilai / Atibala is a small shrub in the family Malvaceae, native to tropic and subtropical regions and sometimes cultivated as an ornamental. It is found in Karnataka and Tamil Nadu. This plant is often used as a medicinal plant and is considered invasive on certain tropical islands. Its roots and leaves are used for curing fever.The type species is Indian Mallow / Thuthi Ilai / Atibala theophrasti. Several species formerly placed in Abutilon, including the cultivated species and hybrids commonly known as "flowering maples", have recently (2012, 2014) been transferred to the new genus Callianthe. Plants of this genus include herbs, shrubs, and trees.They range in height from about 0.5 to 3 meters (1.5 to 10 feet).The herbage is generally hairy to woolly or bristly.The leaf blades are usually entire, but the occasional species has lobed leaves. They are palmately veined and have wavy or serrated edges. Flowers are solitary, paired, or borne in small inflorescences in the leaf axils or toward the branch tips. The calyx is bell-shaped with five lobes. The corolla is usually bell-shaped to wheel-shaped, with five petals joined at the bases.The flowers of wild species are most often yellow or orange, but can be red or pinkish, sometimes with a darker center. The stamens are fused into a tube lined at the mouth with anthers. Inside the tube is the branching style with head-like stigmas. The fruit is a rounded or hemispherical schizocarp with up to 20 segments, each containing a few seeds.  In traditional medicine,Indian Mallow / Thuthi Ilai / Atibala various parts of the plant are used as a demulcent, aphrodisiac, laxative, diuretic, sedative, astringent, expectorant, tonic, anti-inflammatory, anthelmintic, and analgesic and to treat leprosy, ulcers, headaches, gonorrhea, and bladder infection.The whole plant is uprooted, dried and is powdered.

In ancient days, maidens were made to consume a spoonful of this powder with a spoonful of honey, once in a day, for 6 months until the day of marriage, for safe and quick pregnancy. The plant is very much used in Siddha medicines. The root, bark, flowers, leaves and seeds are all used for medicinal purposes by Tamils. The leaves are used as adjunct to medicines used for pile complaints. The flowers are used to increase semen in men. Botanically, Indian Mallow / Thuthi Ilai / Atibala also called Indian mallow in English and Atibala in Hindi is actually an Indian medicinal plant used in Ayurveda. The plant is native to Old World tropics - south Asia and Southeast Asia and sometimes cultivated as an ornamental. It is a small shrub in the Malvaceae family. Some of the popular common names of the plant are Chinese Bellflower, Country Mallow, Indian Abutilon, Indian Lantern Plant, Indian Mallow Abutilon, Monkey Bush, Moon Flower, and Twelve O’clock Flower. It is a medicinal plant with showy golden-yellow flowers and used in Ayurveda, Siddha and Unani system of medicine for preparation of many medicines. Traditionally, all parts of plant are used for medicinal purpose. It is beneficial in general debility, nervous disorders, headache, muscular weakness, heart diseases, bleeding disorders

Botanically, Indian Mallow / Thuthi Ilai / Atibala is an Indian medicinal plant used in Ayurveda. Indian mallow is an herb to subshrubs, annual or perennial, erect and many branched plant that grows about 1–2 m tall and 0.3-0.9 cm in diameter. The plant is found growing in roadsides, low bushes, savannas, lakesides, beaches, dunes, roadsides, sunny locations, in disturbed sites and waste ground in the warm, humid tropics. The plant is commonly found in dry sites in upland fields, waste lands and roadsides at low elevations in its native range. The plant has long tap roots that are fairly long with a number of lateral branches, 1.5-2 cm in diameter, light brown, outer surface smooth with dot like lenticels, bark thin and can be easily peeled off, odor, feeble, taste, astringent and bitter. Indian mallow is beneficial in general debility, nervous disorders, headache, muscular weakness, heart diseases, bleeding disorders and paralytic disorders. Ayurvedic physicians commonly use Indian mallow in joint pain, debility after chronic disease, Hemiplegia and facial paralysis. The oil prepared from Atibala and Bala is beneficial in all types of disorders of the nervous system, joint disorders and muscular dystrophy.

Indian Mallow / Thuthi Ilai / Atibala Powder this compress will greatly ease the inflammation. Along with this compress, if you consume the Indian mallow leaf decoction, it will give best results. For the decoction, 3 big leaves of the plant can be boiled in a cup of water till it is reduced in half and had. Usually the treatment is done for a period of 45 days. Leaf decoction also will prevent constipation and purify the blood.

Indian Mallow / Thuthi Ilai / Atibala Powder has antibacterial properties (it has been proven through clinical research too), it is great for treating all kinds of wounds. For treating wounds, grind the fresh Indian mallow leaves with turmeric and apply on the wounds. It will treat the inflammation, reduce the pain and infection.

Indian Mallow / Thuthi Ilai / Atibala Powder is the best medicine for astringent, and stop Bleeding, and are helpful in bleeding piles, diarrhea, etc. Atibala roots are used in Ayurveda for the treatment of bleeding disorders.

If you have bleeding disorders, take the preparation of the Indian Mallow / Thuthi Ilai / Atibala Powder morning and evening. You will soon have relief from the symptoms.

Take 5 grams of Indian Mallow / Thuthi Ilai / Atibala Powder and same number of pepper cloves and grind them together. Make seven pills out of this. Every day for seven days take one pill with water. This will cure piles due to overheat.

Indian Mallow / Thuthi Ilai / Atibala Powder along with ghee is beneficial for cough and other respiratory problems.

5 Grams of Indian Mallow / Thuthi Ilai / Atibala Powder can be mixed with hot water and drink it twice a day.

Reviews 31
Write Your Own Review