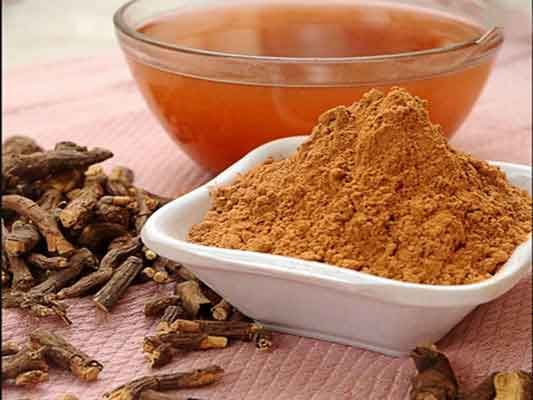 This package has 100% pure and organic Sarsaparilla / Nannari Powder with out any chemicals or preservatives.

Hemidesmus indicus, Indian sarsaparilla Hindi: anantamul  or anant bel ((Tamil: “nannari” “nannetti”, Telugu: Malayalam: Kannada: Haaluballi, Kshirini, Karala,Punjabi),(sinhala: Iramusu)) is a species of plant that is found in South Asia. It is a slender, laticiferous, twining, sometimes prostrate or semi-erect shrub. Roots are woody and aromatic. The stem is numerous, slender, terete, thickened at the nodes. The leaves are opposite, short-petioled, very variable, elliptic-oblong to linear-lanceolate. The flowers are greenish outside, purplish inside, crowded in sub-sessile axillary cymes. It occurs over the greater part of India, from the upper Gangetic plain eastwards to Assam and in some places in central, western and South India. Hemidesmus indicus is used to make beverages and also used in traditional medicine. In Ayurveda it goes by the name of Ananthamoola , also known locally in Southern India as naruneendi or nannari, (Sanskrit meaning: endless root). It is also known as anant vel / maeen mool in Marathi. In southern states of India (particularly Tamil Nadu), Sarsaparilla / Nannari are called maahali or mahani kizhangu and in its pickled form is also served along with rice dishes. It is also called the false Sarsaparilla / Nannari. It is administered in the form of powder, infusion or decoction as syrup. It is one of the Rasayana plants of Ayurveda. It is sometimes confused with another Ayurvedic herb called white sariva. The alcoholic extract of Hemidesmus indicusR.Br. possesses a significant antinociceptive activity.The extracts from the root are used in syrup with sugar and a dash of lemon (Sharbat) and served at most small refreshment shops in South India.

Sarsaparilla / Nannari is a plant. The root is used to make medicine. Hemidesmus indicus is used to make beverages and also used in traditional medicine. The extracts from the root are used as a coolant and a blood-purifier and also used in many other forms, especially as refreshing syrup with sugar and a dash of lemon. It is believed that the extracts from this root help in increasing semen count, purifying blood and neutralising poison. Sarsaparilla / Nannari works as a diuretic and emetic, and has anti-inflammatory properties..Some experimental studies have displayed the beneficial effect of the extract of this root. Sarsaparilla / Nannari is used for treating psoriasis and other skin diseases, rheumatoid arthritis (RA), and kidney disease; for increasing urination to reduce fluid retention; and for increasing sweating. Sarsaparilla / Nannari is also used along with conventional drugs for treating leprosy and for syphilis. Athletes sometimes use Sarsaparilla / Nannari as a steroid for performance enhancement or bodybuilding. Some supplement makers claim that chemicals (sterols) in Sarsaparilla / Nannari can be converted to anabolic steroids like testosterone. But this is a false claim. The sterols contained in Sarsaparilla / Nannari are not anabolic steroids nor are they converted in the body to anabolic steroids. Testosterone has never been detected in any plant, including Sarsaparilla / Nannari. Mexican and Honduran Sarsaparilla / Nannari are used for treating gonorrhea, fevers, and digestive disorders.Sarsaparilla / Nannari is a vine, which trails on the ground and climbs by means of tendrils growing in pairs from the petioles of the alternate, orbicular to ovate, evergreen leaves. The vine emerges from a long, tuberous rootstock, and can reach up to 1-3 m. The hindi name Anantamool literally means, endless root. The small, greenish flowers grow in auxiliary umbels. The flower cymes are stalkless. Flowers have 5 petals, greenish on the outside and purple to yellowish orange on the inside. The flower petals are fleshy, typical of the Oleander family to which it belongs. Now the Oleander family has been incorporated in the Oleander family. Unverified information It is one of the Rasayana plants of Ayurveda, as it is anabolic in its effect. It is used for venereal diseases, herpes, skin diseases, arthritis, rheumatism, gout, epilepsy, insanity, chronic nervous diseases, abdominal distention, intestinal gas, debility, impotence and turbid urine.

The presence of antioxidants in the root and extract of Sarsaparilla / Nannari Powder has been very useful for cancer researchers around the world looking into more natural and herbal remedies. Although research has not been conclusive, the early results show positive associations between the flavonoid and sterol contents of the plant and a reduction in the spread of cancerous cells.

One of the more traditional uses of Sarsaparilla / Nannari Powder was to increase the libido of men and women to increase fertility. Some of the organic compounds found in this root extract have been shown to increase blood flow and boost sperm motility, thereby increasing the chances of conception and improving overall sex drive.

Although research is still ongoing to determine the exact chemical pathway for this health benefit, it appears that the Sarsaparilla / Nannari Powder can suppress appetite. This means that for those trying to lose weight, adding this supplement can curb your cravings and keep you from cheating on your diet.

The antibacterial properties of Sarsaparilla / Nannari Powder are one reason why the topical application of this extract (in salves and creams) is so popular. The antioxidant content can also improve the appearance and health of the skin. By eliminating wrinkles and reducing the appearance of age spots, when applied or consumed, it can keep you looking young.

Sarsaparilla / Nannari Powder has long been used as a diuretic, which means that it stimulates urination in those who consume it. For people who want to purify their body or detoxify in some way, a diuretic can eliminate excess fats, salts, toxins, and water from the body. Furthermore, it has been known to purify the blood, thereby increasing overall health and reducing strain on the liver and kidneys.

How to use Sarsaparilla / Nannari Powder :

Take 5 cups water in a pan and add 100 grams Nannari powder. Mix very well with a spoon. Cover and soak for 2 to 3 hours.After you can add 5 cups sugar in the same pan. Keep the pan on stove top and cook on a low flame still wait for all the sugar dissolves. Cook for about 20 to 30 minutes till the syrup reduces by ⅓ and you get a half in it. Cook on a low to medium flame and do use large pan for cooking the syrup. Let the solution cool completely. Then filter the solution in another pan using a muslin. Pour the solution in a clean bottle and then refrigerate.

Mix the Sarsaparilla / Nannari Powder with water, leave on the side for 8 to 10 hours, undisturbed. Strain using fine muslin cloth and add sugar to it. Make sure it gets into a slightly, sticky consistency. Add juice from the lemons. Lime juice is optional, as the juice preserves it very well.

Take 3 - 4 tablespoons of Nannari syrup in a glass. You can add about ½ to 1 tablespoon of lemon juice. Pour water and mix well.

Reviews 7
Write Your Own Review