Be the first to review this product
Rs.55.00
In stock
Weight#: 6 grams
SKU
Arsenicum Album 30
Wish List Compare
Skip to the end of the images gallery 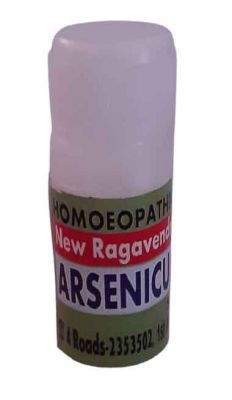 The Scientific Advisory Board of the Central Council for Research in Homoeopathy (CCRH) opined that “Arsenicum album 30 could be taken as prophylactic medicine against Coronavirus infections”. The CCRH released a fact sheet stating this medicine is only a “possible prevention” against flu. The Ayush Ministry recommended taking the medicine for three days on an empty stomach and repeating the dose after a month if an outbreak continues locally.

Arsenicum album is one of the fifteen most important remedies in homeopathy. In classical homeopathy, people are sometimes assigned a constitutional type, named after the homeopathic remedy applied, partly on the idea that people with similar physical or mental characteristics who suffer from similar symptoms can be treated effectively with their constitutional remedy

Few state governments in india recommend Arsenicum album for Covid-19 as a prophylactic.

How to use Arsenicum album

Arsenicum album 30, daily once in empty stomach for three days. The dosage should be repeated after one month by following the same schedule till Corona virus infections prevalent in the community

After taking this tablet, for at least 30 mins you should not take tea or coffee.