Be the first to review this product
Rs.125.00
In stock
Weight#: 100 grams
SKU
Dried Ginger / Sukku (Raw)
Wish List Compare
Skip to the end of the images gallery 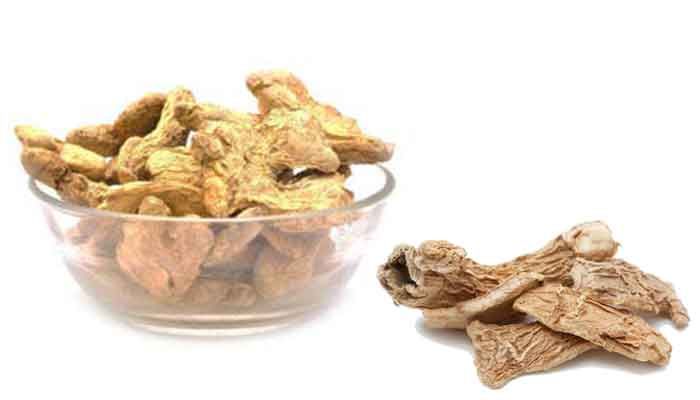 This package has 100% pure and organic Dried Ginger / Sukku with out any chemicals or preservatives.

Dried Ginger / Sukku - Zingiber officinale is a flowering plant whose rhizome, ginger root or ginger, is widely used as a spice and a folk medicine. It is a herbaceous perennial which grows annual pseudostems (false stems made of the rolled bases of leaves) about one meter tall bearing narrow leaf blades. The inflorescences bear pale yellow with purple flowers and arise directly from the rhizome on separate shoots.

Dried Ginger / Sukku has the ability to grow in a wide variety of land types and areas, however is best produced when grown in a warm, humid environment, at an elevation between 300 and 900m, and in well-drained soils at least 30 cm deep. A period of low rainfall prior to growing and well-distributed rainfall during growing are also essential for the ginger to thrive well in the soil. Dried Ginger / Sukku produced in India is most often farmed through homestead farming. Since most ginger crops are produced on homestead farms, the farm employees are mostly family members or other local members of the community. Gendered roles within ginger farming are distributed quite evenly and fairly.

The size of the Dried Ginger / Sukku seed, called rhizome, is essential to the production of Dried Ginger / Sukku . The larger the rhizome piece, the faster Dried Ginger / Sukku will be produced and therefore the faster it will be sold onto the market. Prior to planting the seed rhizomes, farmers are required to treat the seeds to prevent seed-borne pathogens and pests, rhizome rot and other seed-borne diseases.There are various ways farmers do seed treatment in India. These include dipping the seeds in cow dung emulsion, smoking the seeds before storage, or hot water treatment.Once the seeds are properly treated, the farm land in which they are to be planted must be thoroughly dug or ploughed by the farmer to break up the soil. After the soil is sufficiently ploughed at least 3-5 times, water channels are made 60–80 ft apart to irrigate the crop.

Dried Ginger / Sukku is supporting everything regarding digestive health. Functional dyspepsia is the clinical term used to describe upper abdominal discomfort like acid reflux that is thought to be related to slowing of the digestive system. Dried Ginger / Sukku has been shown to be help these issues.Ginger helps increase the body’s ability to empty food from the stomach more quickly known as gastric emptying.

Dried Ginger / Sukku has a very long history of use in various forms of traditional/alternative medicine. It has been used to help digestion, reduce nausea and help fight the flu and common Cough and cold, to name a few.

Dried Ginger / Sukku has been shown to improve blood pressure (in conjunction with medication) by acting as a vasodilator it expands your blood vessels. This is helpful for increasing circulation in the body, which reduces the overall blood pressure throughout the body. Ginger also contains potassium, a mineral that research has found can help lower blood pressure.

Nausea is a term that describes the feeling that you might vomit. Dried Ginger / Sukku  has also been found to reduce the amount of nausea you might otherwise experience when feeling seasick. After surgeries, it’s common for some people to experience nausea and vomiting. The good news is that researchers have found ginger to be an “effective means for reducing postoperative nausea and vomiting.” Not only does ginger provide relief from post-surgery nausea, it can also help cancer patients.

Dried Ginger / Sukku reducing fever in patients suffering from influenza. It is known to act as an expectorant in relieving asthma, cough and tuberculosis.