Be the first to review this product
Rs.99.00
In stock
Weight#: 100 grams
SKU
Indian Ginseng / Ashwagandha (Dried)
Wish List Compare
Skip to the end of the images gallery 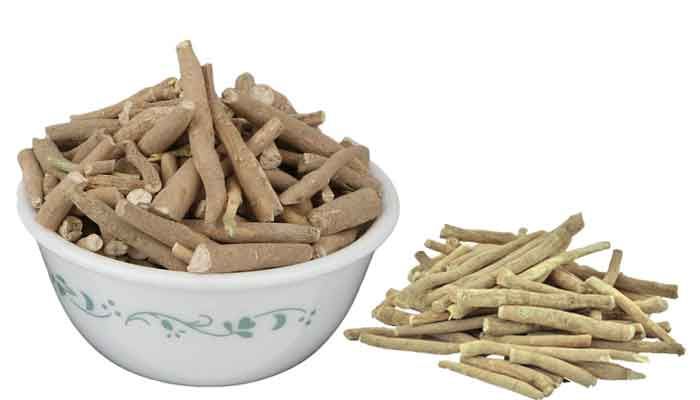 This package has 100% pure and organic Ashwagandha with out any chemicals or preservatives.

Ashwagandha is prone to several pests and diseases. Leaf spot disease caused by Alternaria alternata is the most prevalent disease, which occurs in a severe form in Punjab, Haryana, and Himachal Pradesh. A decline in the concentration of its secondary metabolites occurs by leaf spot disease. A treehopper feeds on the apical portions of the stem, making them rough and woody in appearance and brown in colour. The apical leaves are shed and the plant gradually dies.The carmine red spider mite is the most prevalent pest of the plant in India.

Withania somnifera, known commonly as or Ashwagandha  is a plant in the Solanaceae or nightshade family. Several other species in the genus Withania are morphologically similar.Although commonly used as a medicinal herb in Ayurvedic medicine, there is no conclusive clinical evidence that it is effective for treating any ailment. The plant, particularly its root , has been used for centuries in traditional Indian medicine. Mainly due to the poor quality of clinical research with the plant, there is no high-quality evidence that it provides any medicinal benefit and may cause adverse effects if taken together with prescription drugs.

Ashwagandha is a plant. It grows in central and southern Europe, Iran, China, and Southeast Asia. The fruit and leaves are used to make medicine.People take winter cherry to treat arthritis, gout, enlarged prostate, fever, swelling, and constipation. They also use it to increase urine flow (as a diuretic) in kidney and bladder conditions. Women use it as a contraceptive, and to cause abortion. Owing to the presence of anti-inflammatory, anti-oxidizing, anti-stress, drug withdrawal and sleep inducing properties,Ashwagandha also treats and prevents against arthritis and rheumatism. It acts as a tonic that enhances the quality of overall health.It is widely used in enhancing the sex life in men, preventing cancer, diabetes, stress and anxiety.

Ashwagandha is known to induce relaxation and calm on consumption. Stress which one usually find hard to tackle can be relieved with the use of the herb. It soothes the nerves and releases stress and muscle tension from the body.

Since time immemorial, in the field of Ayurveda, Ashwagandha has been widely used to enhance physical and mental well-being. It is highly efficient is tackling cases of depression and anxiety.

Ashwagandha has long been used for diabetes in Ayurvedic medicine. The roots and leaves of ashwagandha are used to cure diabetes. It was concluded that Ashwagandha possesses antidiabetic and antihyperlipidemic properties that significantly decrease the blood sugar levels in diabetic rats during fasting and the post-lunch period when consumed for 4 weeks or more.

Ashwagandha , with its anti-inflammatory and anti-oxidant properties, is good for cardiovascular problems. It strengthens the heart muscles and can also control cholesterol. Ashwagandha possesses hypolipidemic properties that help in bringing down blood cholesterol levels.

Ashwagandha has been found to be effective in dealing with a variety of rheumatologic problems. The herb is known to decreases inflammation and pain. The herb has anti-inflammatory properties that come from the alkaloids, saponins, and steroidal lactones found within it.

Use of Ashwagandha as opposed to radiation therapy and chemotherapy, the herb can prove to be a viable natural alternative for the treatment of cancer. It limits the side effects caused by the chemotherapy without interfering with the benefits it causes.

Ashwagandha has been found to be useful in improving the muscular strength of the lower limbs and helping recover weakness. It also has a positive impact on neuro-muscular coordination.

Ashwagandha consumption restricts the effects of immuno suppressive drugs and modulates the reactivity of the immune system. It promotes production of red and white blood cells and increases the platelet count.