Be the first to review this product
Rs.60.00
In stock
Weight#: 100 grams
SKU
Jamun / Naval Vithai (Dried)
Wish List Compare
Skip to the end of the images gallery 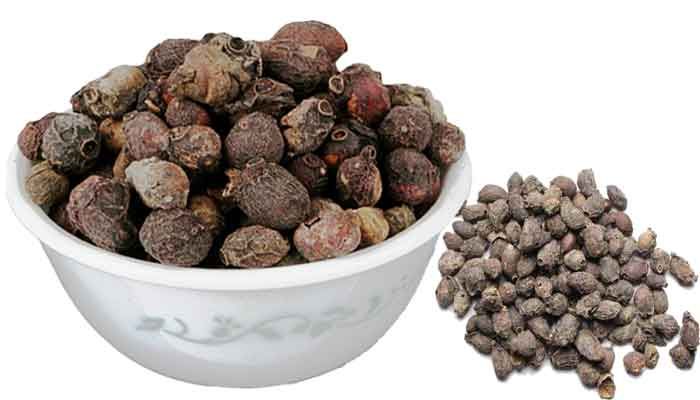 This package has 100% pure and organic Jamblang Seed / Naval Vithai with out any chemicals or preservatives.

Jamblang Seed / Naval Vithai is an evergreen tropical tree in the flowering plant family, Myrtaceae, that is native to India, Bangladesh and Indonesia. Jamun seeds are known to be used in various alternative healing systems like Ayurveda, Unani and Chinese medicine, especially for digestive ailments. Moreover, they are known to combat diabetes and health experts suggest consuming them as a part of managing the condition.

Jamblang Seed / Naval Vithai are known to be great healing medication for diabetics. Both seeds and the fruit have substances called jamboline and jambosine that slow down the release of sugar into the blood. Jamun seeds also increase the availability of insulin. It is best to snack on jamun for effective results.  Jamun seeds not just purifies blood but also helps to cope up with the problem of anaemia. It is rich in iron and is great for the health of the body and skin.

Daily consumption of Jamun seeds help to regulate blood pressure. Jamun seeds has medicinal properties and reduces the fluctuations in the blood level.

Jamblang Seed / Naval Vithai is widely used in folk medicine for diabetes. It is also used for digestion disorders including gas (flatulence), bowel spasms, stomach problems, and severe diarrhea (dysentery). Another use is treatment of lung problems such as bronchitis and asthma

Just like the fruit, Jamblang Seed / Naval Vithai are also possess anti-diabetic activity. The seeds contain alkaloids , chemicals which prevent the conversion of starch into sugar and hence aid in keeping your blood glucose level in control.  It is also added to milk or water and consumed the first thing in the morning to keep diabetes in control. It is used as an effective therapy even in traditional medicine to lower the debilitating impact of diabetes on the body slowly.

In addition to using as a traditional medicine to reduce the debilitating impact of diabetes on the body slowly, Jamblang Seed / Naval Vithai also lower the blood pressure. A study published in the Asian Specific Journal of Tropical Biomedicine , seed extract of jamun lowered the blood pressure by 34.6% in people drinking the extract regularly. The anti-hypertensive effect was attributed to the presence of ellagic acid, which is a phenol antioxidant. Read more on hypertension.

Jamblang Seed / Naval Vithai are reported to be rich in flavonoids, a powerful antioxidant, that not only helps in flushing harmful free radicals from the body but also exerts a protective effect on the antioxidant enzymes. This is the reason, why the seeds are known to aid in detoxification and improve the overall functioning of the immune system as well. The seeds also contain high amounts of phenolic compounds, which are known to have powerful antioxidant activity .