Be the first to review this product
Rs.120.00
In stock
Weight#: 100 grams
SKU
Fever Nut / Kalarchikai (Raw)
Wish List Compare
Skip to the end of the images gallery 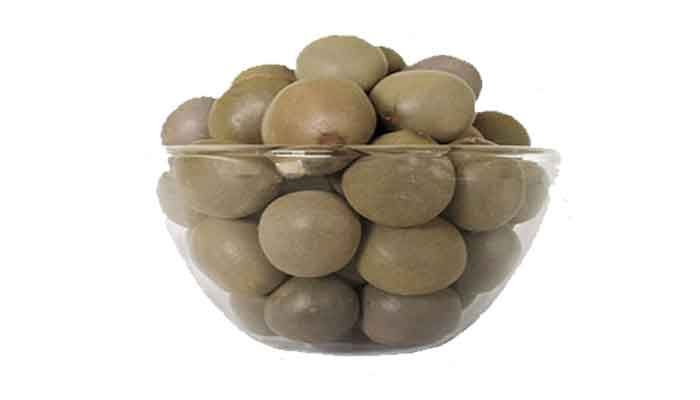 This package has 100% pure and organic Fever Nut / Kalarchikai with out any chemicals or preservatives.

Fever Nut / Kalarchikai is a coarse climbing vine (5-15m long) to a prickly shrub. They can be found in hotter places in India, Sri Lanka and Burma. These trees grow on waste grounds and on coastal areas.

The plant is armed with hooked prickles. Flowers in a cluster (up to 50 cm long) yellow with reddish streaks. Flowers are of one sex only. The fruit pods (6-9 cm long) armed with numerous rigid spines. The fruit splits open when ripe to reveal 1-2 seeds which are oval, smooth and grey.

Seed coat is hard, glossy and greenish to ash grey in color and is traversed by circular and vertical faint markings of the cracks, forming uniform rectangular to squarish rectulations all over the surface. Seed is exalbuminous.

The kernel surface is furrowed and ridged, hard, pale yellowish, white circular to oval, flattened and about 1.23 – 1.75 cm in diameter. Taste is bitter and odor is nauseating and unpleasant. Fever Nut / Kalarchikai is pantropical.

Fever Nut / Kalarchikai is used by traditional Siddha physicians in Malabar regions for psoriasis treatment. The common names of Kalarchikai are Caesalpinia Bonducella, fever nut, Bonduc nut. In Hindi it is known with the names Kankarej, Katikaranjana and the Sanskrit name is Kuberakshi.

Fever Nut / Kalarchikai is the seed from the Caesalpinia bonduc plant, a vining shrub native to India. The seeds of the Caesalpinia bonduc are used in herbal medicine, including the fever nut extract. The plant produces seed pods, which contain 1-2 fever nut seeds per pod. Fever nut and the seed extract are used primarily for alleviating infection symptoms such as high fever and sweating. Traditionally, fever nut has treated malaria and intestinal worms and parasites. The fever nut’s seed extract has been studied for its anti-inflammatory and pain-relieving health benefits. For this reason, fever nut is considered a good remedy for arthritis and various other muscles and joint pains.

Fever Nut / Kalarchikai is very important herb with wonderful medicinal uses and health benefits. It is very famous in Tamil Nadu for treating pcos (poly cystic ovarian syndrome), irregular periods, preventing cancer of many types including thyroid cancer and also for aiding weight loss especially caused due to pcos as it helps regulate estrogen levels. The botanical name of kalarchikai is Caesalpinia Bonducella. It is called Gajga in Hindi, fever nut in English, Angarhavallari in Sanskrit, Gajjiga in Kannada, Kazhanchi in Malayalam, Mulluthige in Telugu, Katukaranja in Marathi and Gila in Oriya.

Fever Nut / Kalarchikai is best avoided completely during pregnancy and also while breast feeding. Though it is a safe herb, it is best to take it in the suggested dosage.