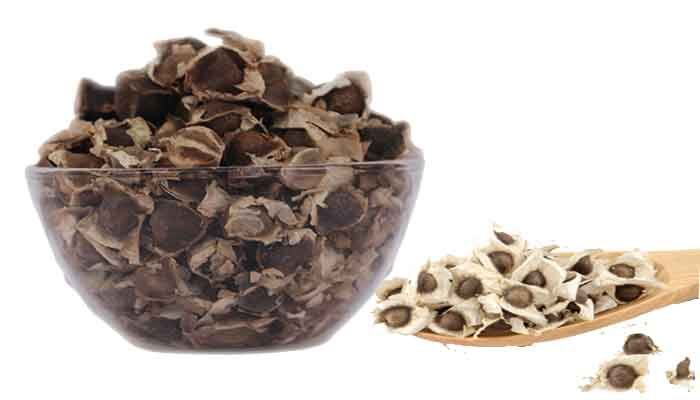 This package has 100% pure and organic Drumstick Seeds / Moringa Seeds with out any chemicals or preservatives.

The Moringa tree has been popularly called as “The Miracle Tree” in Asia, Africa and Caribbean Countries for centuries. It is rich in nutrients like vitamin B6, beta carotene, vitamin C, magnesium, and protein.The pods of the Drumstick or Moringa tree are long, smooth-skinned, dark green, and three-sided. The pods, which can reach anywhere from 6 to 18 inches in length, are soft when mature and have bumps that run the length of the pod, revealing the seed nodes. Within the pods is a fleshy pulp and pea-sized seeds encased in wing-shaped hulls. The Drumsticks are tapered at each end. Moringa pods are bitter with a somewhat sweet taste; their muted flavor allows for a variety of seasoning options.

Drumstick pods are available year-round in warmer, tropical regions. Moringa oleifera, is known as the Drumstick tree for its long pods that resemble drumsticks. The pods of the taller, more mature trees are consumed as are the root, and leaves. It is sometimes called the ben-oil tree for its seed oil which is non-drying and is used as a watch lubricant and paint base. Along with industrial uses, the tree has Ayurvedic properties, anti-bacterial and detoxifying properties. The roots possess a horseradish flavor, and in the west the plant is referred to as the ‘Horseradish Tree’ despite the fact that horseradish comes from an entirely.

Drumstick pods are rich in nutrients like iron, vitamin c, beta-carotene, copper and iodine. Young Drumstick pods are ready to eat when they snap apart when bent in half. If the pod is too old, it becomes fibrous and woody. Drumstick pods are typically prepared by cutting into one or two inch pieces and adding to soups, curries, and Sambhar. They are pickled, boiled, steamed, and fried. Drumsticks can be prepared much like green beans or asparagus. The pods can be sliced lengthwise and the pulp scooped out and eaten; in India this is a delicacy.

Moringa seeds are obtained from the pods of the Moringa plant (Moringa Oleifera) or the drumstick tree, native to Northern India.  They are greyish-white in colour with unique wing-like structures. They can be steamed, boiled or roasted for various purposes. Moringa is a nutrient-dense plant that is rich in vitamins, calcium, iron and essential amino acids. It can benefit the body in a number of ways. Widely known as “drumstick tree” in India, moringa goes by different names in different countries and regions. It is known as ‘Sahijan’ in Hindi, “Munaga’ in Telugu, ‘Murungai’ in Tamil. The Tagalog name in the Philippines is ‘Mulunggay’, which sounds very similar to ‘Moringa’.

Stress can stress your sex life. Moringa Seeds / Drumstick Seeds / Murungai Vithai can throw hormone levels off, spiking cortisol and decreasing dopamine to lower libido. It has not only been show to bring down cortisol levels, but it may also naturally boost testosterone levels, a known sex drive booster. It's extract worked to enhance sexual performance in stressed rats by suppressing cortisol and increasing testosterone.

Moringa Seeds / Drumstick Seeds / Murungai Vithai is its soothing ability which enables it to lower the blood pressure and promotes good sleep. It is a natural remedy for insomnia as it possesses certain properties that can treat sleeping disorders.

Moringa Seeds / Drumstick Seeds / Murungai Vithai is great for boosting your energy and stamina as well as increasing concentration. It improve concentration whereas athletes can benefit in the form of increased endurance during exercise. Moreover, it aids in weight loss because it provides enough energy and vitality to reduce the need for eating to increase energy levels.

Moringa Seeds / Drumstick Seeds / Murungai Vithai is particularly beneficial for pregnant and breast-feeding women who are at the risk of suffering from nutritional deficiencies.

There is insufficient evidence for the side effects of eating moringa seeds. So, it helps to take some precautions. Most importantly, pregnant women are asked to consult their physician about consuming moringa.

Studies have reported no adverse effects in people who consumed 50 grams of this as a single dose or 7 grams daily for 90 days.

It is also not advisable to consume these seeds in large quantities, as its cleansing properties are very powerful and the stomach may take some time to get used to eating such a strong product.